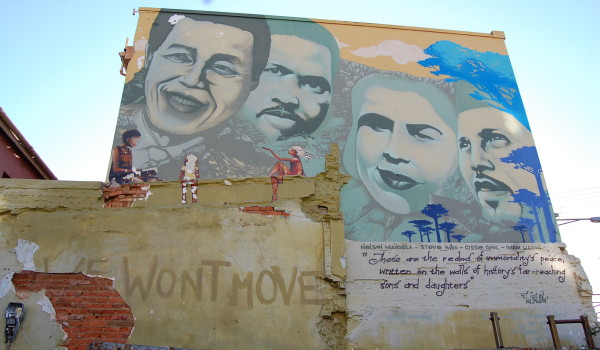 In the small area between the Grand Parade to the north (the original shoreline of the City), District Six to the east, the Company’s Gardens to the west, and Gardens to the south, is a wealth of cultural, social, political and historical assets.

This small toolkit details a selection of the strongest resources in the area. There is no specific order.

They call what their cakes Mucking Afazing, have their own reality TV show (Charly’s Angels), and a ridiculous amount of Twitter and Facebook followers for a cake shop…

There is free wifi on Harrington Square, where Charly’s is based.

MSN called it the best coffee shop in the world, which is mainly for their totally cool steam-punk themed aesthetic. There’s nothing quite like it. The coffee is middling, although probably still the best in the area (try Bean There on Wale St or the Coffee Roasting Company, based at Lourensford Wine Estate)

The offer 100MB of free wifi per patron per day.

Vibrations has been around for almost 15 years now. Mohamed Fall, from Senegal, was the first to introduce djembe drums and drumming circles to Cape Town, in the mid-90s. He bought the building at 129 Longmarket, and built a studio, which became the go-to recording destination for musicians from other parts of Africa.

Perched on the slope of Table Mountain, with views over the city to the sea, at the source of fresh mountain water, the Oranjezicht City Farm is a small-scale, community run show-farm. It hosts a fresh produce market every Saturday, which is a good companion to the Neighbourgoods Market in Woodstock. It is a five minute cab ride from the hotel, and sits on the same water channel that runs under the hotel and the neighbouring Woolworths building.

Built in 1905, Cape Town’s iconic City Hall is just a few blocks down from the Townhouse Hotel, clustered around the Grand Parade together with the City library, the art deco Mutual Heights and the Castle of Good Hope. It is a beautiful building in its own right, jaded by decades of arbitrary and dreary use as bureaucratic office space, and restored externally to its current magnificent in time for the the 2010 World Cup.

Famous for its pipe organ, with some 3165 pipes. And most famous for being the site from which Nelson Mandela made his first public address as a free man, on the 11th of February 1990. There is a memorial on the balcony of City Hall.

The Cape Philharmonic Orchestra stages most of its concerts in the City Hall’s dedicated concert chamber. And the City Hall Sessions, which happen once a quarter, also take place here, presenting South African and Pan-African artists.

An essential visit for any visitor to Cape Town, the District Six Museum, established in December 1994, works with the memories of the District Six experience and with that of forced removals more generally. It provides great insight into the context in which Cape Town finds itself, and pairs well as an experience with the Slave Lodge, around the corner from the Townhouse Hotel.

The Slave Lodge, clustered around Church Square alongside the Dutch Reformed Church (the first church in the country) housed, in appalling conditions, slaves belonging to the Dutch East India Company. It is one of the oldest buildings in the city, and details stories of slaves and slavery at the Cape. It is an essential visit.

(for excellent tours specifically related to slavery in the Cape, talk to Lucy Campbell at Transcending History Tours – the route includes sites around the hotel)

CHURCH SQUARE AND THE SLAVE TREE

Church Square and the Slave Tree
Just across the road from the Townhouse Hotel is Church Square, once upon a time a marketplace for the trade of slaves. In the traffic island between the square and the hotel is the slave tree plaque, commemorating the exact spot at which slaves were auctioned.

THE CASTLE OF GOOD HOPE

Built between 1666 and 1679 by the Dutch East India Company (VOC) as a maritime replenishment station, the Castle of Good Hope is the oldest surviving colonial building in South Africa. When built, it was on the shore, which has since been forced further out due to land reclamation in the 1930s and 1940s.

The Castle is to this day a military asset, in spite of attempts to have it moved to the Department of Arts and Culture. Unfortunately, as a tourism asset, it is not very well used, although it does house interesting art exhibitions from time to time. But it does not succeed at creating a nuanced historical perspective like the Slave Lodge or the District Six Museum. But for sheer scale, and if colonial military history is of interest, it’s worth a visit.

This huge marketplace of Indian and Asian foods buzzes 24/7. For those wanting an inexpensive but delicious bite, while taking in the incredible diversity of Cape Town, this is worth a visit. All of Cape Town eats here, whether its lunch time city suits and workers, or evening leisure-makers, it gathers the widest range of citizens.

The original city garden, providing food for the Dutch East India Company (hence the name Company’s Garden), and Cape Town’s Central Park; 8 hectares of green in the middle of the city, and a great gathering point for Capetonians.

Known as ‘the people’s Cathedral’ for its role in the resistance against apartheid, St. George’s Cathedral is the oldest cathedral in Southern Africa and the mother church of the Anglican Diocese of Cape Town. It is a beautiful space, reflective and meditative, and totally welcoming.

Once up on a time there was Manenberg’s Jazz Cafe and the Green Dolphin. Then they were both gone. For a while, apart from the Monday night jazz jam at Swingers in Lansdowne, there was nothing. Then suddently there was the Mahogany Room. And then a little later, the Crypt, at the base of St George’s Cathedral, opened as a jazz venue.  The differ from the Mahogany Room in that they serve dinner. There are often programming overlaps between the two jazz venues, but on the whole, the Mahogany is the superior venue musically. A good night could see guests walking from the hotel to the Crypt for the early set and a bite, and then taking a short cab ride to the Mahogany for the late set and a few rounds of drinks.