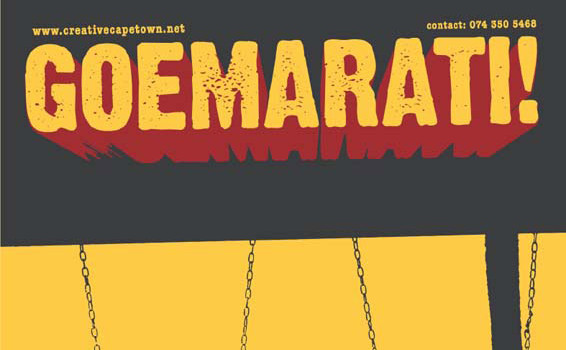 VIDEOS from the Goemarati! series of shows 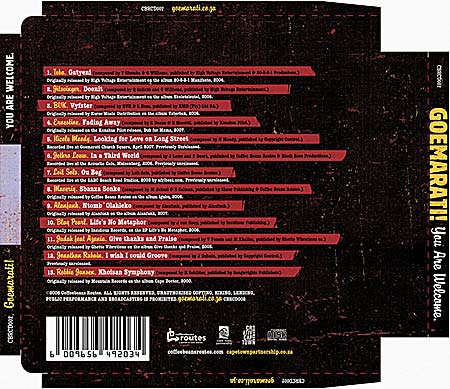 Teba is a reggae artist from Gugulethu who first developed a love for the arts through community theatre. His first musical recording was in 1996 with Skeem, a band probably most known for its big hit Waar Was Jy?. In between international performances alongside reggae artists such as Julian Marley, Andrew Tosh and Alpha Blondy. Teba eleased a solo debut album, 20-5-2-1 Manifesto, in 2004. Gatyeni, featured in Goemarati, is taken from this album.

BVK or Brasse vannie Kaap tragically lost its lead man, Ashley Titus, AKA Mr Fat, in 2008, prior to the release of this album. As a result the band is no longer playing. They will be remembered though as a massive influence on hip hop in Cape Town, both through their music and their social activism. Vyfster, their track on this album, was originally the themetune to a hit South African TV programme in the 80s, composed by former Shifty Records label boss Lloyd Ross. BVK took that theme and reworked it into a modern anthem.

Jitsvinger’s track called Doenit, the Afrikaans term for “do it”, was originally released in 2006 by High Voltage Entertainment. It’s a favourite hit on the Cape Flats where Jitsvinger grew up in Mitchells Plain and Kuils River. It’s beat is inspired by Prophets of the City and Brasse vannie Kaap, with elements of hip hop and poetry.

Arguably the better known recorded artist in this compilation, Ernestine Deane has become a Cape Town icon on the national stage. She’s a successful musician who’s been recording since early 2000 with Moodphase Five and with other artists. She did a fantastic duet with Simphiwe Dana on The Collaboration, a 2004 compilation and features prominently in Healing Destination, an album by Mac McKenzie and the Goema Captains of Cape Town.

Previously unreleased spoken word artist Nicole Moody brings a different sound to the Goemarati album in her debut Looking for Love on Long Street. lthough she is employed full time in tourism marketing, Nicole says writing and performing poetry is what she enjoys the most. She finds inspiration from life and living; and sees every person, place, object and occurrence as a story waiting to be told. Nicole lives in Woodstock but grew up in Retreat.

Jethro Louw’s In a Third World is harsh socio-political commentary about violence and crime. The lyrics are hard but the music itself is beautiful, featuring Khoisan instruments such as bows, percussion, piano and guitar. A member of The Khoi Khonnexion, Jethro is poet who calls himself the Ghetto Poet and sometimes Tanneman !Xam. This track is a collaboration with Black Rose.

Loit Sols is a poet, a singer and a guitarist. He took up the guitar at age 21 and is self-taught in music and writing. He’s been writing since he was 8. Previously unreleased, Loit has been performing on the international stage since leaving a corporate position at YOU magazine where he was a graphic designer.

Mavo Jokazi is the man behind Maveriq. About his music he says: “Basically, it’s about spontaneity. Every beat, every second, counts. It’s about observing human oddity, capturing conversations and everything else to form a magical song; giving a voice to township life. Our audience is a cog in educating us on what to perform in the next gig.”

In the short time they’ve been on the circuit, AlanFunk have made the Cape Town music scene take notice. They’re difficult to pin down: part deep funk, part Fela Kuti afrobeat, part dub blues, the music is as eclectic as the band members. It was bassist and music director of the group, Steve Kramer, who engineered the birth of the band with encouragement and facilitation from one of the city’s great patrons of things good, Mr Masterson.

Blaq Pearl wrote her first piece at the age of 12, with the intention of simply expressing herself and releasing some of the frustrations that she has to deal with in her community – in Mitchells Plain – and life. This first writing, Life’s No Metaphor, developed into a song that has ultimately developed into an album, which she launched in February 2007. She has a degree in psychology and linguistics. In between performances she works with convicted prisoners at Pollsmoor. Her late brother, ‘Devious’ (1977-2004), is her biggest influence.

Judah, featuring Azania, is a seven piece outfit at the heart of the reggae scene in Cape Town. They have backed most of the reggae artists that have visited Cape Town, including Benjamin Zepheniah and Dawit Manelik Tafari. They have shared stages with The Wailers and Burning Spear. Judah is the lead vocalist, and his brother Wakhile is the bass player for the band. He also runs the Ghetto Sound Studio in Nyanga, where the reggae talent of Cape Town is birthed and berthed.

Jonathan Rubain is one of the emerging stars of Cape Town. This youngster is hot. 22 years old, he has the fingers of Mac McKenzie and the privelege of growing up in an era of opportunity. He’s a phenomenal bass player and a great composer, just watch out when you get him on a gospel tip. Jono is constantly on the move, studying music, playing numerous gigs across the Western Cape alongside some of the country’s top poets and music masters, as well as fronting a Gospel Jazz Band. This year alone he has travelled to Malaysia and France for performances. If you see him, try to catch up with him. You won’t be disappointed….I wish I could Groove is previously unreleased.

Robbie Jansen is a master saxophonist, singer and band-leader with more than 30 years of musical wisdom behind him. The choices Robbie has made over his life have led to some truly remarkable achievements. Recognized as one of the Cape’s leading entertainers, he has also been one of the main forces in developing the “Cape Jazz Style” and he has received a Provincial Honours Award in appreciation of his lifelong contributions to the Western Cape and beyond. Khoisan Symphony came from an early classic of his, the album called The Cape Doctor.

The Goemarati CD – a compilation of some of Cape Town’s most talented artists will be launched at the AGM of the Cape Town Partnership on 28 October 2008. The Goemarati Project initially focused on music in public spaces as a way to promote local distinctiveness in Cape Town.

The CD is the culmination of the acclaimed Goemarati concert series which took place at venues across Cape Town in 2007. Funded by the Provincial Department of Economic Development and Tourism, Goemarati is part of the Cape Town Partnership’s Creative Cape Town strategy which creates opportunities for the promotion of local content and develops marketing and sales opportunities for musicians.

Andrew Boraine, Cape Town Partnership Chief Executive says: “Creative Cape Town is a social, economic and spatial strategy of the Cape Town Partnership to promote an active, vibrant and diverse central city by using culture to accelerate urban regeneration. Goemarati is one of the strategies through which we achieve this by hosting events that attract people from diverse backgrounds into the city. Goemarati is our hip ‘made in Cape Town’ brand. Attached to the project is a new website www.goemarati.co.za, which promotes and sells local music, film, literature and other interesting products.”

The CD features 13 artists, from music legends like Robbie Jansen to previously unreleased artists like Jonathan Rubain and Nicole Moody and young stars like Teba Shumba. The diverse, but uniquely Cape Town tracks range from a Khoisan Symphony and a reggae hit, to a Xhosa poem and an Afrikaans anthem.

Iain Harris, Managing Director of Coffeebeans Routes the music agency commissioned by Cape Town Partnership to develop Goemarati and produce the album explains: “Goemarati brings together the diverse sounds and textures of Cape Town. It is an example of the musical and lyrical talent of Capetonians. It will open up new income generating streams for many artists who are struggling to get their big break as a result of a lack of infrastructure and the geographical barriers within the music industry.

“Cape Town has a rich variety of genres and artists. Creative Cape Town, through Goemarati, aims to cultivate this music talent to the level where artists can more easily access national and international stages,” says Harris.